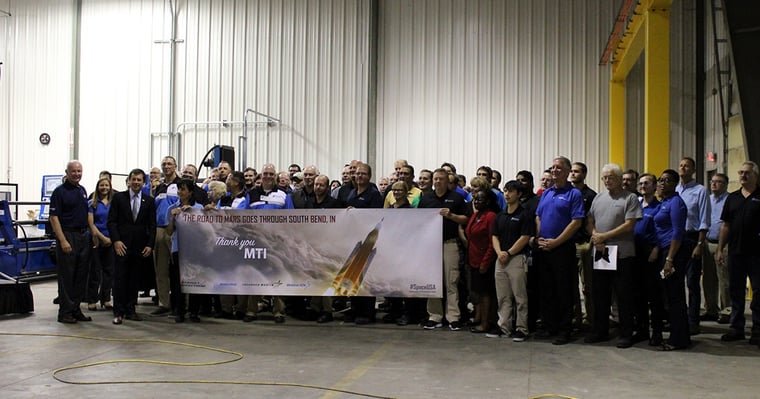 The SLS is the most powerful rocket ever designed and built. The rocket will initially support deep space exploration with missions to Mars as early as the 2030s.

MTI played a key role by inertia welding the powerhead main injectors for the RS-25 engines.

“It’s humbling to be a part of this group and a part of this program,” said MTI President and CEO Dan Adams. “We think about our journey as a small business in 1926 serving Studebaker. And now, we get to serve some of the titans of industry.”

Dan Adamski, program manager for the RS-25 engine, congratulated MTI for their outstanding role in the refurbishment of the vertical rotary friction welder (VRFW) used to join the powerhead main injectors. The decision to upgrade the friction welding machine resulted in significant cost savings and the project lead time cut in half.

Friction welding is one of the only technologies capable of joining the components due to the materials being joined and the high temperatures involved.

“When you’re sitting on top of a launch pad, you really have faith and trust in the people putting you there,” said veteran astronaut Brian Duffy.

MTI’s contributions to deep space exploration are also a significant point of pride for Indiana and the South Bend community.

“If you knew the kind of sophistication that is going on and the advanced manufacturing that happens in South Bend, you would see what our future is made of,” said South Bend Mayor Pete Buttigieg. “To be associated with the space program is just about the most prestigious thing that anybody doing anything technological can hope for.”

MTI has established itself as a leader in friction welding, including Rotary Friction, Linear Friction, and Friction Stir Welding technologies.  In addition to contract manufacturing services, MTI has delivered machines to Boeing, GE, Rolls- Royce, Pratt and Whitney, Federal Mogul, and many of their tier one suppliers.  A family owned business founded in 1926, MTI employs 185 people in their South Bend, United Kingdom, and Slovakia locations.

For more information on MTI and its family of world-class friction welding technologies, visit: www.mtiwelding.com.