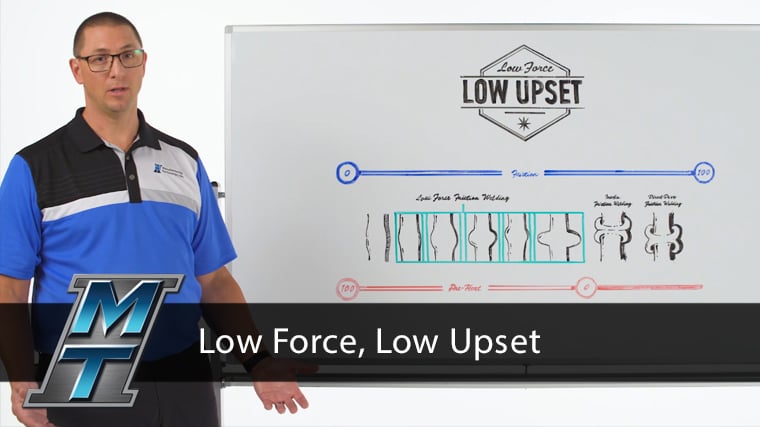 Throughout the past few episodes of Whiteboard Wednesdays, we've walked you through some of the key benefits of Low Force Friction Welding.

But arguably one of the biggest advantages of our newest solid-state joining process is the ability to achieve low upset.

If you've been following along in our series, you likely recognize the continuum pictured above. On the left side, we have diffusion bonding, which is all preheat and force with no relative motion.

And on the opposite side, we have traditional friction welding, which is all relative motion and force with no preheat.

Low-Force Friction Welding falls in the middle of the continuum.

Because of the element of preheat with Low-Force Friction Welding, you can make very low upset welds — they take on more of a bulge shape, as opposed to the predominant flash curl typically generated by traditional friction welding.

Let's imagine the wall of a tube after it's friction-welded.  Depending on the application, you may need to remove the Outer Diameter (OD) flash and Inner Diameter (ID) flash. The flash curl presents a difficult challenge to accomplish that.

You may need a two-axis flash removal, which, depending on the application, could be complicated and expensive. But with Low Force Friction Welding, having only a bulge in the upset is a much easier flash geometry to remove.

There's even a way to skip the flash removal process altogether.

Read on below the video to find out how.

You can do the same thing with a Low Force weld and generate enough bulge-like flash to move the contaminant out.

But if you have a clean interface, you can make welds that have the same quality with very low upset that might prevent you from even having to remove the flash at all.

To take that a step further, you can even produce a low force friction weld with no ID flash to begin with.

Though if you do choose to remove the flash, MTI can create a geometry by manipulating the parameters of preheat, force and relative motion in order to create flash that's much easier to remove — a significant value for a customer that saves a whole step in the process. This would be especially useful for applications such as drill pipe or hydraulic cylinder rods.

The ability to achieve low upset is just one key benefit of Low-Force Friction Welding.

To unlock and discover its full potential, such as reduced cycle times, tighter weld tolerance and smaller machine size, contact us now to begin your development work.