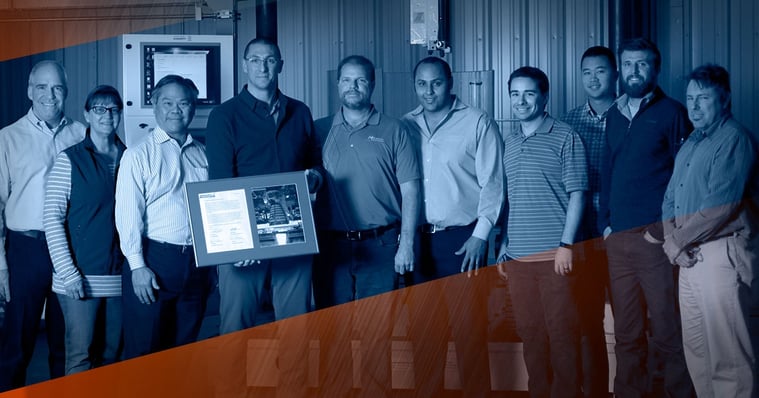 SOUTH BEND, IN - Aerojet Rocketdyne, a subsidiary of Aerojet Rocketdyne Holdings, Inc. (NYSE: AJRD), has recognized Manufacturing Technology, Inc. (MTI) for its work on the RS-25 rocket engine, a key element of NASA’s space exploration program.  MTI was instrumental in the refurbishment of the inertia welder and production inertia welding for the RS-25 Main Injector.

“We are proud to have played a role in such an important part of space history,” said MTI President and CEO Dan Adams.  “It was such an exciting opportunity to work alongside Aerojet Rocketdyne and contribute to the journey to Mars.”

A cryogenic liquid hydrogen-and liquid oxygen-propelled rocket booster engine, the RS-25 was developed by Aerojet Rocketdyne for NASA’s Space Launch System (SLS) and is initially scheduled to support deep space exploration with eventual missions to Mars in the 2030s.  The most powerful rocket in the world, the SLS will carry both cargo and astronauts.

MTI has a long history within the aerospace industry.  A vertical rotary friction welding machine (VRFW) built by MTI in 1981 was brought out of storage as part of Aerojet Rocketdyne’s process to recertify the RS-25.  The VRFW had originally been used to friction weld the Powerhead Main Injector on the Space Shuttle Main Engine (SSME), which was used on all 135 Space Shuttle Flights.

With a cost savings of $1 million and the lead time cut in half, Aerojet Rocketdyne and MTI agreed that refurbishing and upgrading the VRFW was the most cost-efficient and time-saving option.

In March 2016, MTI began refurbishments of the VRFW, making upgrades to the machine’s drives, control system, software, and mechanical systems.  Twenty-two weeks later the refurbishments were complete, and in September of 2016 testing commenced.

On-time delivery of the inertia welded Main Injector enabled the program to continue fabrication of the RS-25 Certification Engine which will help to maintain the program’s schedule and mitigate delays downstream.

Aerojet Rocketdyne is an innovative company delivering solutions that create value for its customers in the aerospace and defense markets.  The company is a world-recognized aerospace and defense leader that provides propulsion and energetics to the space, missile defense and strategic systems, tactical systems and armaments areas, in support of domestic and international markets.

MTI has established itself as a leader in friction welding, including Rotary Friction, Linear Friction, and Friction Stir Welding technologies.  In addition to contract manufacturing services, MTI has delivered machines for aerospace, oil and gas, automotive, and military applications.  A family owned business founded in 1926, MTI employs 220 people in their South Bend and United Kingdom locations.