Whiteboard Wednesday: A Friction Weld at a Fraction of the Force 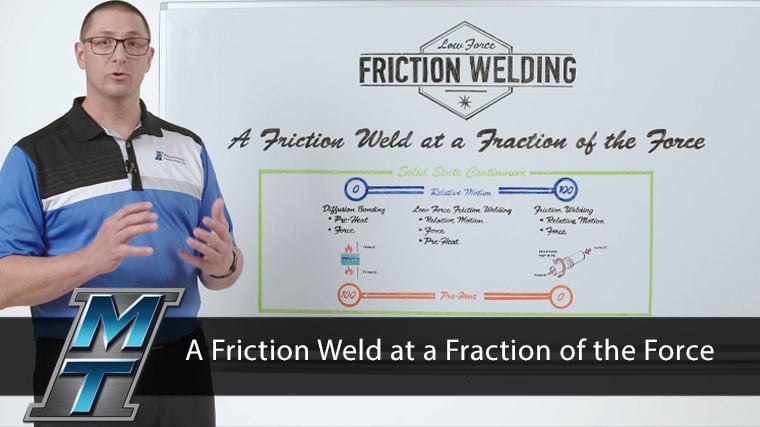 For decades, MTI has been using friction welding to create unique joining solutions for customers across a variety of industries.

Up until a few years ago, linear friction welding, rotary friction welding and friction stir welding were our methods of choice for creating strong, durable welds.  But recently, we added a new form of solid-state joining to our lineup that has the potential to revolutionize friction welding as we know it.

Read on to discover how a variety of companies can benefit from our new process.

WHAT IS LOW FORCE?

Unlike traditional friction welding, Low-Force Friction Welding uses an external energy source to raise the interface temperature of the parts being welded, reducing the process forces required to make a solid-state weld.

Traditional friction welding, on the other hand, does not use a preheat but it does use relative motion and high-force in order to create friction, elevating the temperature at the weld interface to make a solid-state joint.

Take a look at our solid-state continuum:

On the far left, we have diffusion bonding, which uses 100 percent preheat and no relative motion.  Diffusion bonding is a lengthy process and is not ideal for producing a high volume of parts.

On the other end, we have friction welding. This process consists of 100 percent relative motion and no preheat. Unlike diffusion bonding, friction welding can support the high-volume part demands of the aerospace and automotive industries.

Both ends of the continuum require a high forge load to be applied.

Then, we add a little bit of relative motion and low forge force to the preheat to accelerate the process. Now, we have an excellent source of a solid-state joint.

As a result, we make a friction weld at the fraction of the force: Low-Force Friction Welding.

WHAT THIS MEANS FOR OUR CUSTOMERS

Low-Force Friction Welding touts a list of benefits, including:

Stay tuned for our next episode as we explore the most notable differences between Low-Force Friction Welding and traditional friction welding.  We'll explain further how the advantages we listed above are achievable through this new process.