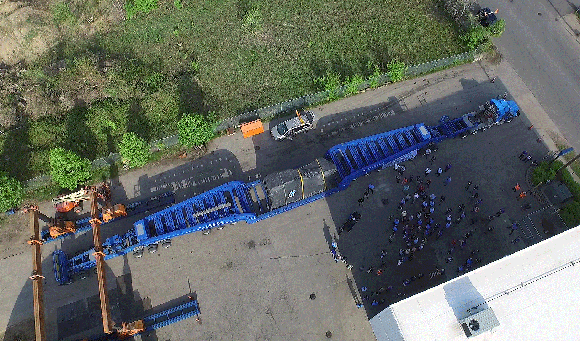 “We are proud to select Manufacturing Technology, Inc.’s linear friction welding machine, which offers a faster, safer and more reliable process. The machine reduces lead time by precisely welding airfoils, while also improving the quality of the part,” said Greg Treacy, general manager, Compression Systems Module Center. “Across all of our sites at Pratt & Whitney, we are investing heavily in our facilities and this is just another example of how we are incorporating the latest most advanced manufacturing techniques into our processes. This machine is the largest and most innovative, automated and ergonomically capable linear friction welding machine.”

The main frame base “superload” will travel on a 19-axle flatbed transporter approximately 14-feet wide and 200 feet long. In total, the linear friction welding machine will be delivered using six standard flatbeds carrying loads ranging in gross weight from 40,000 to 240,000 pounds. At least one police escort and two escorts from the transport company will be required throughout the duration of the trip. Installation will begin after final delivery on May 20 and is expected to be completed in late September 2015 at the Pratt & Whitney facility.

Including all components and subsystems, the linear friction welding machine weighs approximately 400,000 pounds, or 200 tons, and requires an installation area of approximately 40 feet by 60 feet. The machine is 20 feet tall and housed in a pit nine feet deep. Linear friction welding is a joining process in which one piece moves up and down at high speeds while the other piece moves parallel to the ground and is pressed against the first piece with great force. The heat generates one of the strongest possible manufactured welds that present-day technology can accomplish.

Manufacturing Technology, Inc. takes a global perspective on providing joining and welding solutions. MTI has established itself as a leader in friction welding, including rotary friction and linear friction welding technologies, delivering machines to Boeing, GE, Pratt & Whitney, Rolls-Royce and many other tier-one suppliers. A family owned business founded in 1926, MTI employs 180 people in its South Bend, United Kingdom and China locations.