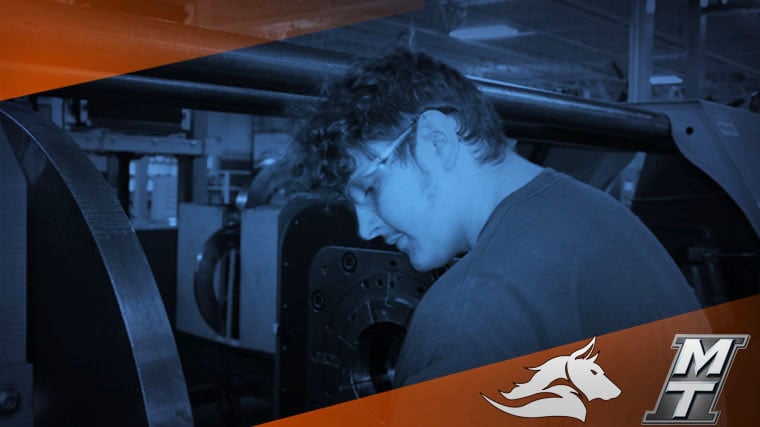 If you haven't seen the recent headlines about manufacturing across the Midwest, allow us to summarize: the skills gap is growing.

In October, the 2019 Indiana Manufacturing Survey revealed that companies are becoming increasingly concerned that there aren’t enough workers in the industry. Experts say the combination of retiring baby boomers and low unemployment numbers is driving the shortage of skilled manufacturing workers.

But luckily for the industry, work is in progress to close the gap — and a big part of the effort is happening right here in South Bend.

A few years ago, MTI teamed up with Career Academy South Bend (CASB) in a partnership that’s, undeniably, a win-win.

A win for the Career Academy because its interested high schoolers have a chance to land an apprenticeship at MTI that teaches them the ins and outs of friction welding.

And a win for MTI because the company receives help from young, bright minds with the hope those apprentices will someday turn into employees.

Consider Gaige Popielski a poster child – or young adult, rather – for the partnership.

Gaige was in eighth grade when he began his journey at CASB. The public charter school, located roughly five miles from MTI, offers a unique, immersive learning experience and can be particularly attractive to students who would prefer to enter the workforce immediately following high school.

“Teachers at the school are a lot more hands-on with things,” Gaige explained. “A lot of [my classmates] were in the same mindset that they wanted to do stuff with their hands instead of sitting and reading from a textbook all day.”

As a sophomore, Gaige began taking welding classes at CASB. And it didn’t take long for that class to evolve into a passion. In fact, Gaige received certification for MIG welding even before he received his diploma.

Shortly after beginning his senior year, MTI offered Gaige and one of his classmates the opportunity to join the MTI family as apprentices. And while friction welding varies quite a bit from traditional MIG welding, Gaige saw it as a valuable growth opportunity that he simply couldn’t pass up.

“With friction welding, you’re still creating something out of two different things,” said Gaige. “It’s no different if you’re doing it with your own hands or setting up a machine to do it for you.  It definitely still follows the pathway for my passion for welding.”

Even before Gaige walked in the door on his first day, MTI had created a multi-level training program for him that was designed to fit around his school schedule. Gaige’s direct supervisor at MTI, Jacob Smith, says the onboarding is designed to expose apprentices to as many facets of the company as possible – giving students nearly the same experience as any other new employee.

“The only thing student apprentices can’t do is run an aerospace job by themselves,” says Smith. “Through our training, they work in shipping and receiving, quality, the metallurgical lab, the machine shop, and of, course, they learn how to set up machines, run them and tear them down.”

Smith says, for him, one of the best parts about the CASB partnership is watching fellow employees blossom into mentors as they coach the apprentices.

“It has a bit of a parenting feel to it,” Smith explained. “Our employees do a good job putting apprentices under their wings and teaching them everything they can. They have a lot of patience with students because they know they’re just starting out.”

Gaige says the relationships he formed with his mentors during his apprenticeship helped give him the confidence he needed to start taking ownership of his role and tackling tasks on his own.

“They taught me in ways that didn’t feel like they were belittling me if I did something wrong,” said Gaige. “They’d pop jokes here and there, but it was always a friendly thing. We always had a lot of fun together.”

As the end of Gaige’s apprenticeship and graduation drew near, he knew he’d have to start looking for a full-time job soon. Luckily, he didn’t need to look very far. After completing the apprentice program, MTI offered Gaige a full-time position, a fitting reward for what Gaige calls one of the most valuable learning experiences of his life.

“From an apprentice to a full-time employee, I really noticed that my self-image has changed,” Gaige said. “I’m better at what I do, and when it comes to the machines, I feel like I could teach a new employee a thing or two.  And that says a lot because I really didn’t know anything when I started!”

The Career Academy South Bend says it’s happy it was able to provide Gaige with the foundation he needed to help grow his apprenticeship into a full-time job and says it’s proof the valuable partnership is already paying off.

“For Gaige, the MTI experience really worked for him,” said Rob Koehler, CASB’s Director of Marketing and Public Relations. “He gained some valuable experience from the job but also understood expectations from work in general.  It’s always our wish to have students who start somewhere as an apprentice to finish and go into the job.”

Looking to the future, MTI says it’s excited to meet more students from CASB and to give them their first, real-world taste of skilled manufacturing.

“For MTI being willing to bring high schoolers in even though we are doing really technical stuff shows a lot about our company and its faith in the academy,” Smith said. “If you’re willing to learn and push yourself, companies are willing to pay for these skilled trades."

That’s a sentiment CASB echoes, too. It says it's aiming to shrink the skills gap with each graduating class that passes through the school.