Eyes of an Engineer: Part 1 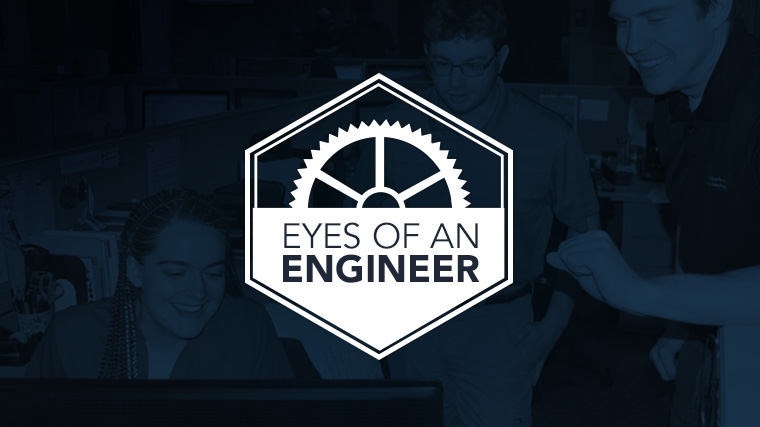 Every day, the engineers at MTI are working to solve complex manufacturing challenges through diverse applications of friction welding. They design the machines that help make our customers’ parts even better — and they’re passionate about their work.

Today, we’re pleased to introduce you to three of them: JT, Matt, and Susannah. They’ll tell you how they got here, and what they love about working at MTI.

JT Brennan, Matt DeVito, and Susannah Yoder all came to MTI with degrees in mechanical engineering. While JT and Matt both studied at Purdue University, Susannah attended Rose Hulman, where her father is a professor of engineering. In fact, both of her parents are electrical engineers, but as Susannah says, “Mechanical was something I could see, touch, and feel… It was easier for me to grasp.”

JT and Matt both liked the hands-on aspect of the field as well. Both spent a lot of time taking things apart and putting them back together as kids. And both were encouraged to leverage those natural skill sets into a career path.

“I’ve always enjoyed figuring out how things worked,” JT notes. “I was always playing with blocks and building things with K’Nex and Legos.”

How they found MTI

MTI is committed to networking with colleges and universities to find talent. JT, for instance, found his job on Purdue’s career website. And Matt, discovered MTI and friction welding at a career fair.

“It was a technology I really could get behind,” Matt says. “I felt there was a lot to be learned behind the theory and science of it all. It’s not just improving the machines. It’s improving the process, and improving the fundamental understanding of the science behind it.”

In the midst of grad-school deadlines, Matt was called for an on-site interview, which included discussions with multiple team members. Ultimately, just five minutes before presenting his final thesis, MTI called to offer him a position.

And while Susannah would ultimately learn about MTI at a career fair as well, her path to the industry took a few unique turns, however. She was homeschooled, then took a couple college classes in high school to get the feel for a traditional classroom setting. After obtaining her degree, she took graduate classes, taught English in China, and tutored in other locations overseas.

After that, she discovered MTI. “I didn’t know about friction welding at that time. It wasn’t something we had learned at all,” she says. At MTI, she found a workplace where she could learn all of the specifics, on the job.

Getting started at MTI

JT had two phone interviews before meeting with MTI team members face-to-face. “MTI did a great job of making me feel in my comfort zone… They didn’t talk in vague terms… Instead, they had me working on solving problems. That was something I could sink my teeth into.”

Similarly, Susannah received her job offer following a phone interview and a four-hour, on-site interview. She started out working on Contract Friction Welding, later she learned to run the machines, then welded parts for customers, and spent time assembling machines. “That was a good experience,” she says, “because it let me see the machines, and learn what to watch out for. I kept a little notebook of different things the builders would mention. Occasionally now, I look back and say, ‘Yeah, they were right.’”

Why they love their work

When it comes to working at MTI, Matt says, “There are things I couldn’t have dreamed about making on a grad school (project) budget. Designing them and seeing them on the floor in a functioning machine is extremely rewarding.”

JT agrees, saying “I get to see the fruits of what my work is doing. I have friends at other companies who do work and pass it along, and that’s the last they see of it. But here, I do a design. I get to see it come on the floor. And if there are any problems, I’m the one they come talk to.

Matt notes that he particularly enjoys being a part of highly-technical initiatives. One recent project, for instance, had him participating in a conditioning monitoring initiative, which involved measuring the vibration of large aerospace machines to discover what happens when they’re operational.

Susannah notes that she’s grateful for the MTI mentoring program. As a new employee, she was able to reach out to an assigned person with any questions she had about the company and the work. “For me, that was good. Because as engineers, we can be a little introverted. So it helped out.”

She says the culture is important to her — and for her, MTI feels like a family. Flexible hours allow early birds like her to come in before 8 and leave before 5. Frequent potlocks result in co-workers eating together. And monthly “town hall” forums allow for direct contact with the upper management, so employees can provide ideas for improvements.

“What I like best about MTI,” she says, “is that not every day is the same. They’re very different because we are a bit smaller. We get to do every aspect of the design process, and I also have days where I’m working on a concept for a machine — but don’t have to get to the finished product. I can just offer ideas to help with a project.”

Find a career path at MTI
Want to learn more about working at MTI? Check out our Careers page, and contact us with any questions you may have!