Eyes of an Engineer: Finding a Home at MTI 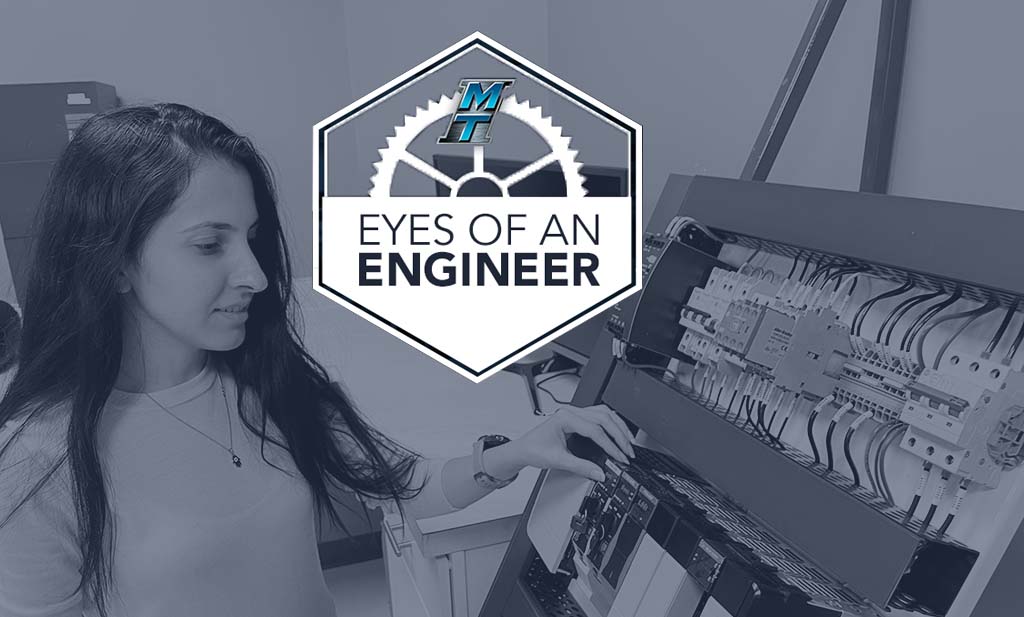 Sarah Sahib was studying quietly at the precise moment that life – as she knew it – changed for good.

A deafening boom rattled the stillness inside her classroom. The windows that separated her from the war-torn streets of Iraq shattered, sending shards of glass in every direction.

Sarah watched in horror as her classmates – some badly wounded – struggled to escape. They didn’t know it at the time, but a terrorist group had bombed a nearby police station, leaving the school as collateral damage.

Moments after the blast, Sarah’s twin brother rushed in, picked her up and carried her away to safety.

Before the Iraq War broke out in 2003, Sarah said her life – by most accounts – was happy and normal. As a high schooler, she was beginning to cultivate her newfound fascination with computers and had just completed her first programming class.

A stark contrast to the tech landscape in Western culture, Sarah said the majority of her fellow programming students were women, adding that men in the country tended to gravitate toward mechanical or defense jobs.

“I really liked it,” she recounted. “It was really interesting to me.”

Her family was happy, too. Her mother and father built and ran a restaurant, serving up Mediterranean dishes to the neighborhood.

“It was nice,” Sarah explained. “I have a big family. If I needed anything… I could call up my aunt or uncle… and they would help me.”

However, as the war raged on and Al-Qaeda took a stronger hold on the city, it became heartbreakingly clear that her family couldn’t stay in Baghdad for much longer. Sarah explained that because her mother is Sunni and her father is Shia, the mixed religions in her household made her family a target for the terrorist group.

“They told us they would kill us if we stayed,” Sarah said. “So, we left.”

A NEW LIFE AWAY FROM HOME

Desperate to escape the ongoing war and the increasing threats from Al-Qaeda, Sarah’s family closed their restaurant and relocated to Egypt.

Not long after settling into her new home, Sarah enrolled into a prestigious university in Cairo, where she was finally able to immerse herself into programming. Sarah would often stay at school late into the night, workshopping and programming games to help broaden her computer skills.

Shortly after graduation, Sarah realized she needed to move again – not because her life was again in danger, but because workplaces where she could use her programming skills were virtually nonexistent.

“There were no jobs in Egypt, no opportunities,” Sarah explained. “So that’s when we decided to move to the US.”

FINDING A PLACE IN AMERICA

Sarah’s family first landed in Oklahoma, where she accepted a job as a Quality Control Engineer for a software company. She then took on another position in the Oklahoma City area, flexing her talents at a payroll provider, implementing new application software.

“It’s so quiet in the US, “she said. “There is a system for everything. It’s not messy… it’s organized. I felt safe here.”

Then, Sarah headed East, taking a job as an auditor for a large aluminum company in the Pittsburgh area.

At this point, things were going well for Sarah. She was doing meaningful programming work, her family was enjoying their new life in America and she met and married the love of her life.

With her husband cheering her on, Sarah then enrolled into Northwestern University and received her Master of Science in Information Systems (MSIS).

New degree in hand, Sarah began applying for jobs when a company in South Bend, Indiana caught her eye.

(Spoiler Alert: It was MTI.)

“I loved the people, they were so nice to me,” Sarah said, recalling her in-person interview at MTI’s global headquarters. “The interview went really well, and I was so happy to accept the job.”

Sarah’s supervisor, with whom she just so happens to share a first name, took Sarah under her wing, and helped get her up-to-speed on programming friction welding machines.

“Sarah [Wiseman] is awesome,” Sarah said of her supervisor. “She is so supportive, and I am learning so much from her.”

Much of Sarah’s prior work history involved working for larger companies, so Sarah said the more intimate environment at MTI made her feel more welcome.

“It’s like family… everybody helps each other,” Sarah said.

Today, Sarah is helping program the software that helps run MTI’s friction welding machines – but she doesn’t want to stop there. With more experience under her belt, she wants to build her own new software for the machines – coding it all from scratch. Sarah says, based on the support she’s received so far, she feels ready to take on the challenge.

“Every day I’m doing something different – it’s challenging,” Sarah said. “It’s awesome for me because I’m learning. The controls department is great in teaching me.”

Want to work alongside eager-to-learn engineers like Sarah? We're hiring -- browse our current job openings to see which role may be right for you!