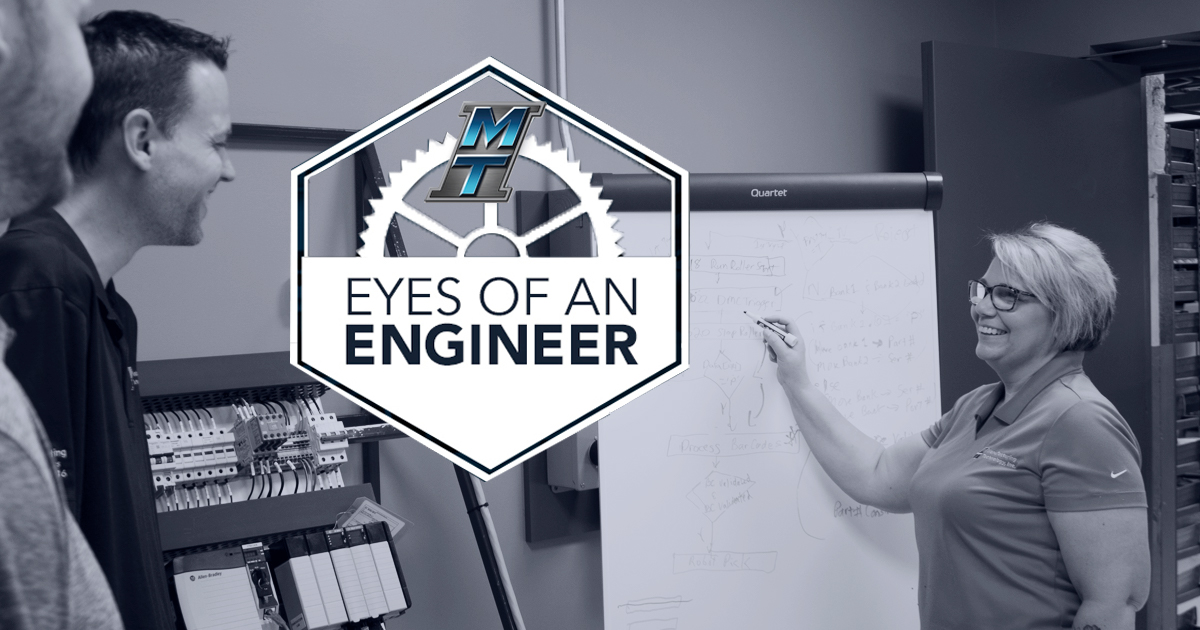 MTI's Eyes of an Engineer series offers a glimpse into the lives of the people who help make MTI the global friction welding experts. In this series, we sit down with Sarah Wiseman, who oversees the software programming team.

December 31st, 1999 – five minutes till midnight. The excitement and optimism of a new millennium were met with a twinge of uncertainty. For the past year, experts had warned about the dreaded “Y2K Bug,” which had the potential of ravaging computer systems around the world as soon as the calendar flipped to the year 2000.

Sarah Wiseman was waiting, too. But her worries were a bit more complex – and a lot more personal – than a proverbial bug that ultimately had a much bigger buzz than bite.

For the three years leading up to the dawn of a new millennium, Sarah worked for the Indiana Department of Transportation. It was her first programming job – one that evolved from an internship. Her role involved programming a user interface for the toll booth operators and ensuring it communicated to an automation system in each booth dotted along all 157 miles of the Indiana Toll Road.

But when the ball dropped in Times Square that evening, the only major bumps in the road were the ones felt by tires – not toll booth operators.

Her first project was a success.

“My story can be told a lot of different ways,” Sarah said with a laugh, settling into her office chair at MTI’s global headquarters in South Bend. It’s now been more than 20 years since the night she witnessed her first major programming project come to life.

She has arranged her office in a way that allows her to either sit or stand while typing. Fitting, for someone who says she can’t stay still for too long – but we’ll get to that later.

In a span of five minutes, her computer dinged at least three times, the screen filling up with conversations about her latest projects.

As Software Systems Integration Manager, Sarah oversees the team that programs the software for each friction welding machine on MTI’s build floor.

“As controls and software engineers, we take someone else’s ideas and make them into a reality,” she explained. “You’re scratching out a concept on paper… then all of a sudden it’s in a rocket going to Mars! Being a part of that… there are just no words.”

On this particular Thursday afternoon, there are more people poking their heads into her office than she’s used to. After all, Sarah did join MTI in the midst of a global pandemic and the era of social distancing.

Taking the easiest route, it would seem, doesn’t seem to be Sarah’s modus operandi.

“My upbringing was not normal,” Sarah said as she began reflecting on the path that would one day lead her to MTI. “But from a really young age I knew I wanted to change the world and nothing was going to stand in the way of what I wanted to do.”

“No one knew where I was,” she recalls. “Until my grandma found me, and I moved in with her.” 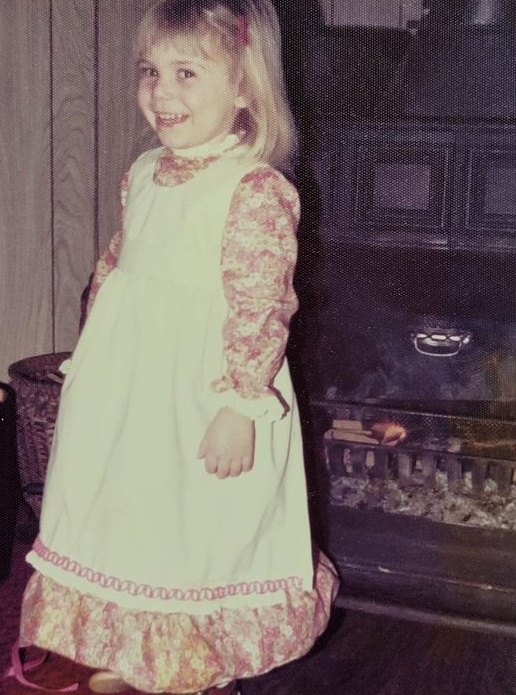 Sarah as a young girl

Growing up in Warsaw, Indiana, Sarah’s grandparents did their best to tame her unbridled spirit. She recalls a day her grandmother looked outside and saw Sarah on a swing set, upside down, hanging from her toes.

“She put me in gymnastics pretty quickly after that,” Sarah laughed.

For Sarah, the gymnastics studio was more than a place to burn off energy– it was an escape that later turned into a serious passion. At one point, she was even working toward the 1992 Junior Olympics.

As Sarah got older, her schedule got busier: gymnastics, track and field, art classes, choir. Yet, her mind kept drifting to something else – something that didn’t require quite so much physical exertion.

Challenging the idea that humans can only be a left-brained or right-brained, Sarah found herself drawn to computers and numbers. That curiosity nudged her to sign up for her first programming class.

“I learned BASIC A, and I thought it was amazing,” Sarah recalls. “That’s when I got hooked on the technology, but I didn’t really know what that meant at the time.”

Fortunately, it wouldn’t take long for her to find out – she just needed to adjust her plans a bit. Just before starting her senior year of high school, Sarah gave birth to her daughter. But she was determined to finish school and continue her education.

“I literally graduated high school on a Friday and started junior college on Tuesday,” Sarah said.

Figuring they’d be a perfect match for her love of numbers, Sarah initially enrolled in accounting classes, until she learned the college also offered computer programming courses.

“Every programming class they offered, I took,” she said.

So much for being an accountant.

In one of her programming classes, Sarah saw something she hadn’t seen before – a female teacher. One day after a particularly tough class, Sarah approached her teacher to ask her a question that would ultimately jump-start her career.

“I asked… do you actually think this is something I could do,” Sarah recalled. “And she said, ‘why do you ask me that question’ and I said... I don’t know… this just isn’t a female thing. And then [the teacher] said ‘you would be great at this. Because you are a female, you are going to go far.’”

And go far she did. 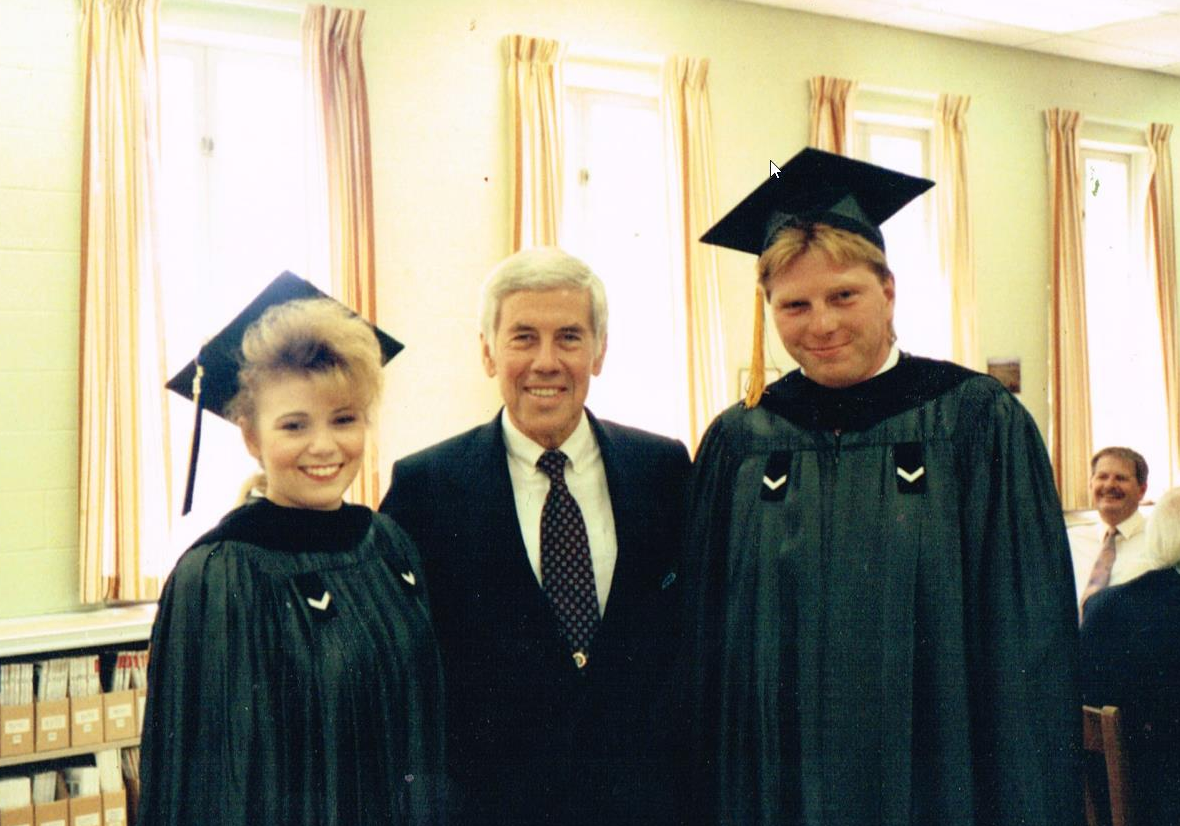 After transferring to IU South Bend, Sarah held several different programming and automation jobs, dialing in her skills and pushing herself every day to keep improving.

“I’m the type of person who likes to learn and be involved – continuously,” Sarah said. “That’s something very vital in the automation space. Things change so quickly – sometimes too quickly. So, change cannot be scary. Learning cannot be scary.”

Her desire to be involved didn’t simply shut off as soon as she left the office each day, either. Outside of work, Sarah, who now has a daughter and a son, threw herself into her children’s lives by volunteering in as many of their activities as possible.

“Let’s see… I was a band parent,” Sarah said. “And I was a den mother and worked myself all the way up to a national position with the Boy Scouts of America, overseeing STEM on a national level.” 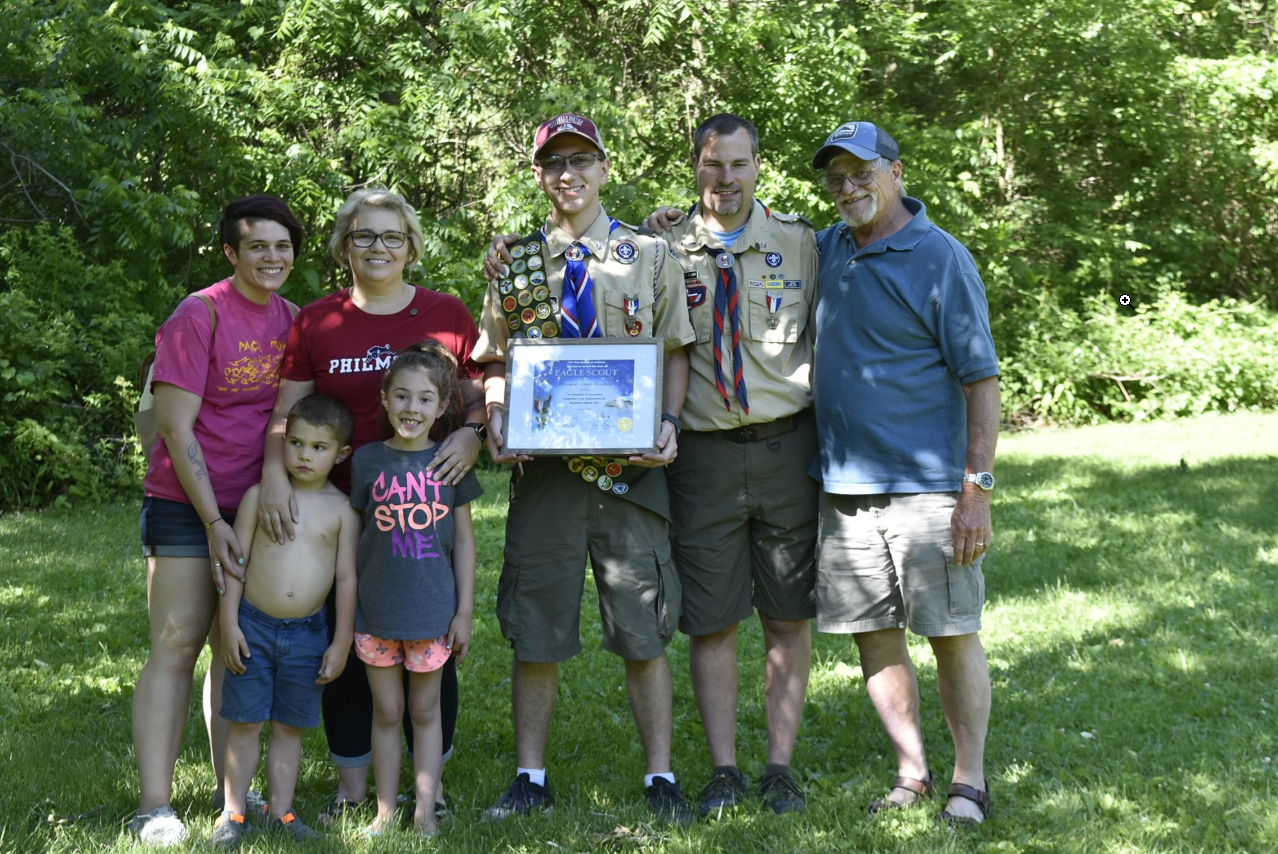 Sarah and her family, celebrating her son's Eagle Scout award

Sarah easily could have ignored a LinkedIn message she received one day in the fall of 2020. It was from a recruiter, telling her about a job opening at MTI. After all, she already had a job and much of her free time was devoted to volunteering.

But by this point in the story, you should know Sarah isn’t one to dodge a new opportunity. The job at MTI, Sarah said, was a perfect fit.

“I’m getting emotional,” Sarah said, fighting back tears. “But I thought to myself ‘this is it’… all my years of experience, the way I have lived my life and the way I want to help people… it all matched MTI’s leadership style and cultural development.”

She was immediately matched with a mentor, who helped her understand friction welding and the machines that make the welds. Now, approaching her one-year anniversary at MTI, she already has plenty to show for herself in terms of programming and automation.

“It’s connecting those dots – to make a wheel turn or a light flash or the weld moving,” she explained. “With programming you just sit at a computer all day and write programs and see something change on a screen. When you write an automation program, and you see something physically move, that’s something entirely different.”

Building and programming a friction welding machine isn’t a one-man (or a one-woman) job; it requires months of work and input from dozens of other people both in and outside of Sarah’s department. Sarah credits both her upbringing and her volunteering for shaping her as an effective leader and communicator.

“I went to four different elementary schools and three different high schools, so I had to make new friends a lot,” said Sarah. “I can’t just sit in a corner and wait for someone to come talk to me. That’s not how it works. You have to make the first move.”

As Sarah continues writing her latest chapter at MTI, she watches her calendar fill up with new projects and new opportunities to inspire and grow her team. And no matter how busy or stressful her days are, Sarah says enjoying herself and her coworkers will always remain a top priority.

“There’s a time to be serious but there is also a time you just need to sit back, relax and do the jig,” Sarah said. “When you’re serious all the time, it just sucks the fun out of having a career.

Sarah says her ideal teammate is someone who  isn't afraid to ask questions and enjoys taking things apart and putting them back together again. Does this sound like you? If working in a collaborative environment and developing your career are appealing aspirations, browse our current job openings to see which role may be right for you!