Eyes of an Engineer: Putting the Pedal to the Metal 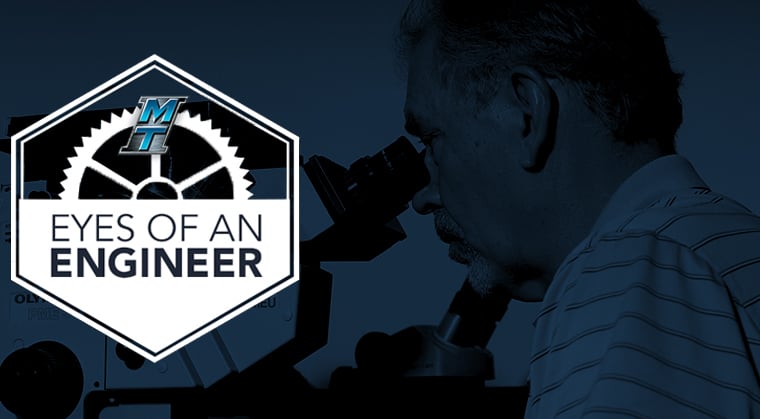 Resting his face against the eyepiece of a microscope, MTI Chief Metallurgist Jim Hoffman meticulously spins a cluster of knobs, gradually bringing a customer’s latest weld into focus. He squints, rotates another dial then shifts his eyes toward his computer.  His keyboard clicks rhythmically as he adds to the notes sprawled across his two monitors.

Hours later, he again finds himself in a deep state of concentration. And much like he was earlier, he’s again surrounded by metal. But this time – it’s his own collection.

Jim’s garage or, as he affectionately calls it, his “playpen,” is home to his custom-built nitro bike – a project he started several years ago but can never quite find a way – or even a good reason – to finish.

“On its third run, I got it up to 194 miles per hour,” Jim recalls, as a smile creeps across his face.

On a quarter-mile track, you can’t stay in one gear for long. And if you ask Jim, the same is true for your life and career, too.

While engineering has historically been one of the most popular college majors, a subset of the massive field, metallurgy, sees much fewer students. Jim’s fascination with metals, however, began well before he even set foot in a college classroom.

While taking an advanced machine shop class in high school, he was offered the opportunity to begin working – and learning the ropes of metallurgy – at a South Bend tool and die heat treat.

The shop owner helped coach Jim into metallurgy, teaching him how to heat treat different types of metals.

“I think [the owner] really wanted one of his sons to get a degree in metallurgy, Jim recalled. “But when one went into accounting and the other wanted to run the shop, I think he turned to me for that teaching opportunity.”

While gaining hands-on experience at the shop, Jim started his freshman classes at IU South Bend before transferring to Purdue for its metallurgy program.

Several years, lectures and exams later, as he was preparing to begin the master’s program at Purdue, Jim got a phone call that changed his entire plan.

A heavy bearings company in South Bend wanted to hire Jim for a metallurgy position. Eager to jump straight into the workforce, he accepted – under one important condition.

“Part of the hiring agreement was they’d pay for my master’s degree at Notre Dame… so I guess you could say that worked out for me,” Jim said with a laugh.

After spending several years refining his metallurgy skills in the bearings industry, another opportunity called. And Jim answered.

DOWN TO THE WIRE

Anxious to explore another facet of manufacturing, Jim took a job at a plant that produced carbon steel wires for cable controls. Eventually, the plant was purchased by a Japanese company, which planned to break ground on a tire cord operation.

Jim served as a liaison between the American and Japanese contractors, making sure everyone was on the same page – despite the language barrier.

“I never did learn much Japanese though,” Jim joked. “It’s a hard language!”

Jim’s next adventure began to blur the lines between a job and his love for cars – a line that would only get blurrier as time went on.

A Detroit wheel company had a problem. And it was confident Jim had the skills to solve it.

His blossoming background in metallurgy helped him, as a project manager, fix a strength issue with the company’s newest line of Ford wheels.

Itching to shift gears again, Jim returned home to South Bend and spent more than a decade honing his craft while working again in the wire and bearing industries.

Idling has never been Jim’s thing. Not on the track and not in his professional life. So, when MTI approached him about a chief metallurgist position, he knew it was time to pivot.

Despite the decades of metallurgical experience under his belt, Jim still had a lot to learn when he joined MTI. One of the biggest advantages of friction welding is the ability to join two different metals. Bimetallics were a new concept to Jim, but one he was eager to explore.

“Learning friction welding and seeing how these different materials react is just very interesting to me because everything is so different,” Jim said. “So, it’s true that no two projects are the same."

While his day-to-day tasks vary, Jim’s main roles at MTI include helping customers decide which types of metal are ideal for their application, testing the strength of a weld and evaluating how the properties of a metal may have changed after friction welding.

Even with his storied career, Jim continues to learn new things every day. But not all of those lessons are necessarily used in the lab.

Remember, we promised we’d talk about the nitro bike again.

While at a motorcycle rally in Michigan several years ago, Jim’s bucket list quickly began to take shape. After watching nitro bikes race all afternoon, he made himself a promise – someday, he’d attend a nitro bike school.

“I took a few runs on the bike and I got hooked,” Jim recalls. “So much for a bucket list – I ended up buying one!”

Buying the nitro bike also meant building it from the ground up. But thanks to his metallurgical background, the build came a lot more naturally than he thought it would.

“I select different materials for some parts and think – hey – I know this would be a good combination,” he said.

During his best run, Jim completed a quarter of a mile in just 6.8 seconds.

“The front end was up the entire time,” he said. 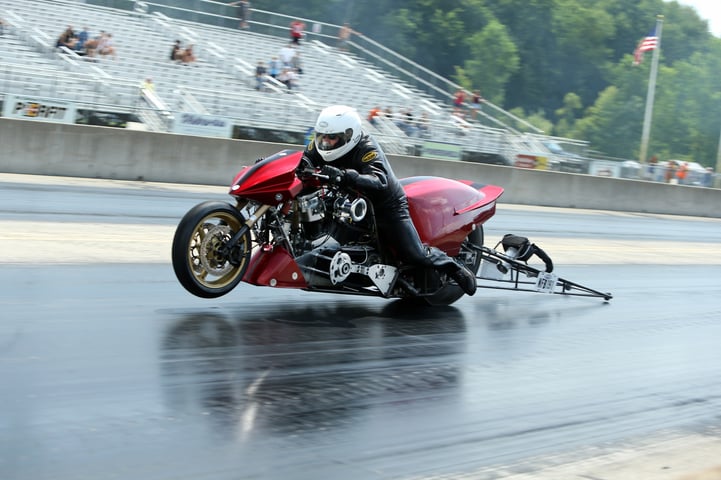 His nitro bike is equipped with a parachute that helps the bike slow down after the run.  Jim, meanwhile, apparently wasn’t born with one of those parachutes. He has no plans to stop or slow down. His ultimate dream is to run the NHRA Summernationals.

“But I need a bigger engine first,” he said.

While Jim admits there is a certain merit that comes with sticking to one company and one industry for your entire career, he encourages budding engineers to broaden their horizons once they no longer feel fulfilled.

“Your heart just has to be into it. I’ve seen guys who have had the grades but didn’t have the passion…and they floundered,” Jim said.

His biggest piece of advice to college students?

Looking to the future at MTI, Jim says he's excited about the upcoming projects and research on his agenda, though there's one he finds particularly fascinating.

"The Mars mission," he said. "I've got to do some test welds... and it's some really neat stuff."

NASA's Space Launch System (SLS), by the way, reaches speeds of 24,500 miles per hour. I think we all understand now why Jim can't get enough of that project.

Click here to read more about MTI's involvement in NASA's mission to Mars.