Eyes of an Engineer: When Passions Become a Career

Situated in a quiet office on the second floor of MTI’s global headquarters in South Bend, Indiana, Constanza Lengerich carefully examines a new batch of data from her team’s latest weld. The numbers excite and energize her – they signal pivotal progress in the company’s research and development of a new form of solid-state joining, Low-Force Friction Welding.

Her mind begins to race.  Within minutes, her computer screen is filled with neatly organized thoughts and ideas. The new data has only been in her hands for a few minutes, but already, she’s developing different ways to present these findings to current and prospective customers.

It’s important to her that she writes everything down.

It’s important to her that she has a plan.

But, even more so, it’s important she reminds herself that plans – whether personal or professional – work best when they’re written in pencil, not pen.

Her original plan didn’t necessarily include friction welding – though it’s not surprising it eventually got written in.

Growing up in Chile, Constanza was exposed to more advancements in engineering by her 8th birthday than many people would hope to see by the time they graduated college.

That didn’t happen by chance, of course.

Her father, a mechanical engineer, wouldn’t always be alone when he walked through the halls at the cellulose production plant where he worked. Many times, a young and curious Constanza would be at his side, eager to learn more about the vast world that inspired her dad.

Constanza (left) poses with her father and sister.

“My siblings and I would often have long conversations with my dad about the engineering processes he was involved in, the problems that he presented and how he solved them,” she said. “He is very passionate about his job and that was obviously inculcated in all of us – most of my siblings are engineers.”

Even as Constanza grew older, she never seemed to grow out of her interest in engineering. Much to her father’s delight, she attended an extensive, six-year industrial engineering program in Chile. After graduation, her family expected she’d dive head-first into an engineering career to flex all the skills she learned in school.

Well, remember what we said about writing plans in pencil?

Engineering wasn’t the only thing that captured Constanza’s interest and sparked her passion. The thought of becoming an entrepreneur was just as exhilarating.

That didn’t happen by chance, either.

Constanza’s great-grandparents came to Chile from Germany and built their own business. Both of her grandfathers were entrepreneurs, too.

“It’s partly in the genes,” Constanza said with a laugh. “I always knew I wanted to study engineering, but I also wanted to have business skills in case I wanted to build my own company someday.”

Certainly, Constanza could have enrolled in a few business courses at her local college, but that wouldn’t have done anything to satisfy her biggest desire of all.

“I wanted to see the world,” she said.

And see the world she did.

The first stop on Constanza’s global trek: New Zealand. There, she lived the life of a backpacker, picking up odd jobs along the way. She was able to learn, from the ground up, what makes a business tick.

“The work was hard, but it was humbling,” she said. “The lessons I was learning… they were so unique… so different from what I’ve learned in the classroom.” 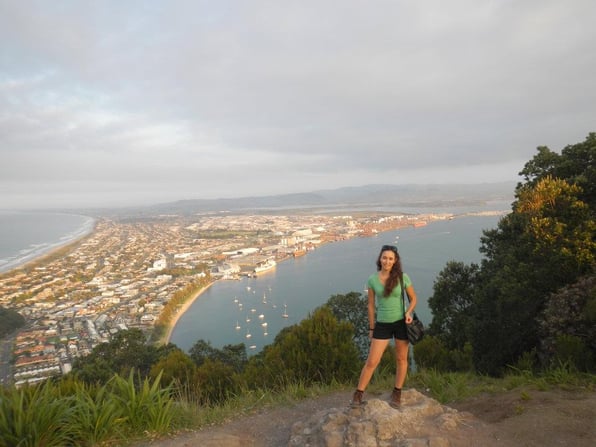 Constanza during a hike in New Zealand.

Those lessons, paired with her formal education, quickly started to pay off. Not long after she arrived in New Zealand, she traded in her assortment of part-time roles for her first real business gig: a market research analyst for Coca-Cola, by way of an internship through Infotools.

“It was just so interesting to see how market research helps major companies make business decisions,” she said.

Impressed by her work and passion, Infotools offered her a long-term job to continue growing in the market research field. It was an attractive offer, but Constanza knew she was bound for something even bigger – not to mention more stamps on her passport.

After traveling and working throughout multiple countries in Asia and Oceania, she teamed up with her sister for her first shot at running a business. Together, they launched a water filtration company, for which Constanza worked as the Chief Marketing Officer.

Constanza (right) poses with her sister as they promote their water filtration company.

“The experience I had running HMSolution with my sister was incredible because I had the opportunity to learn and do so many things related to engineering and entrepreneurship,” she explained. “I collaborated in building various prototypes of a water treatment solution for arsenic removal and developed the business model and pitched the project to different institutions and investors in Chile and the U.S.”

By now, you may be wondering… how does this world-traveling, marketing whiz meets company co-founder find her way to South Bend?

In 2016, the University of Notre Dame offered Constanza a scholarship for the ESTEEM (Engineering, Science & Technology, Entrepreneurship Excellence Master’s) program. Without hesitation, she, once again, took advantage of this new opportunity to see the world and packed her bags for the Midwest. 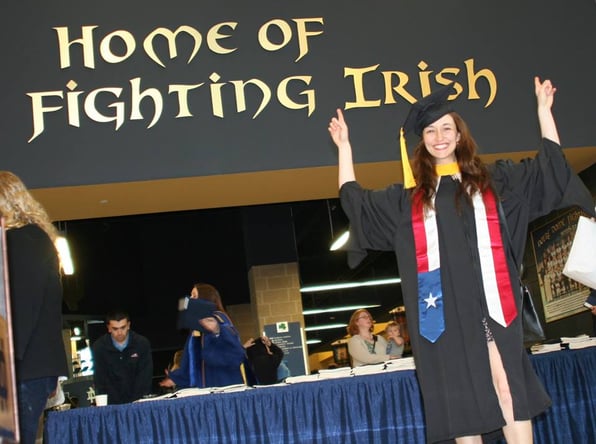 Constanza celebrates after commencement at the University of Notre Dame.

After completing her degree, the university’s IDEA Center offered her a job that put her in charge of evaluating new engineering technologies being developed by scientists – helping to determine whether there was an adequate marketplace for them to land.

While at Notre Dame, Constanza made a connection with two executives at a local engineering and manufacturing company. If she hadn’t made that connection… well…let’s just say you wouldn’t be reading this blog right now.

FINDING A HOME AT MTI

While working for the university, her connections at MTI, CEO Dan Adams and Vice President of Sales & Marketing, Bob Besse, offered Constanza a position as the Market Development Manager.

“I was very excited about this opportunity because I would be helping commercialize the new Low-Force Friction Welding technology,” she said. “This would allow me to continue being involved in developing innovative engineering solutions while implementing the entrepreneurship and business skills I gained with my education and building my own company.”

In her position, Constanza guides the commercialization process of Low-Force Friction Welding. The technology uses an external energy source to raise the interface temperature of the parts being welded, reducing the process forces required to make a solid-state weld compared to traditional friction welding.

Specifically, she identifies potential customers, defines a business strategy to attract those markets, builds a plan – which could include marketing efforts, R&D efforts or both – with a schedule and a budget defined, and ensures MTI documents the R&D lessons learned.

Her position requires engineering and business expertise – a perfect blend of Constanza’s abilities.

“I am a person who needs to be constantly learning and challenged, and that’s something that this position has,” she said. “Low-Force Friction Welding is not just one technology it’s actually four with different benefits that can apply to various markets.” 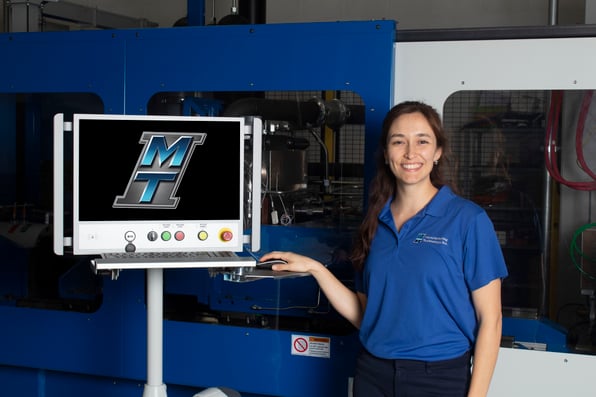 For her job at MTI, collaboration is key. She works side-by-side with the company’s engineers and the marketing team to ensure the development and marketing of Low-Force Friction Welding is closely aligned with her team’s strategic plan.

“The only way to succeed at launching a new technology is to effectively work as a team,” she explained. “You need engineering to perform R&D and design the new solution according to the customer’s needs, you need sales and marketing to effectively communicate the benefits of the technology that we’ve discovered through R&D and you need the executive team to understand what is needed to launch a new technology so that they assign the resources required. These tasks cannot be performed successfully if they are being executed by each of these departments separately. Teamwork happens every day at MTI and that has helped make huge progress in the commercialization process.”

Constanza credits her contributions at MTI to her ability to communicate effectively – a skill she relied on and constantly cultivated during her time abroad.  And now, she’s able to use those travel experiences on a professional level to help bridge gaps internally to ensure everyone is always on the same page.

“Engineering can be a learned skill in time and it’s important to be very knowledgeable in your field,
she said. “But, if you want to grow and succeed as a professional, you have to develop other skills like leadership, teamwork and communication.”

Within the next five years, Constanza would like to see Low-Force Friction Welding as the leading welding technology in multiple industries.

“What’s unique about Low-Force Friction Welding is that it provides a solid-state joint - the highest quality type of weld - with minimal to no material displaced or lost as well as a rapid cycle time,” she states. “Today there’s no technology out there that can provide these benefits altogether.”

No two paths to a career in engineering are the same. Constanza stresses there is no one-size-fits-all approach to entering this ever-evolving field – or any field, for that matter.

A NOTE FROM OUR HR DEPARTMENT:

Constanza is an excellent testimony to what MTI is looking for in a new family member.  Her enthusiasm for new technology, for working together with fellow technical experts, her tenacity for solving problems and her courage to take risks and charter new territories and markets is exactly the kind of employee MTI wants to cultivate, support and develop.  Our work is expansive and challenging and can only be successfully completed by working as team with each other and our customers.  Constanza not only knows this, but models and lives it. If you’re interested in learning more about our work and how you can be a part of it, please explore our careers page or reach out to our Human Resources Department at hr@mtiwelding.com.