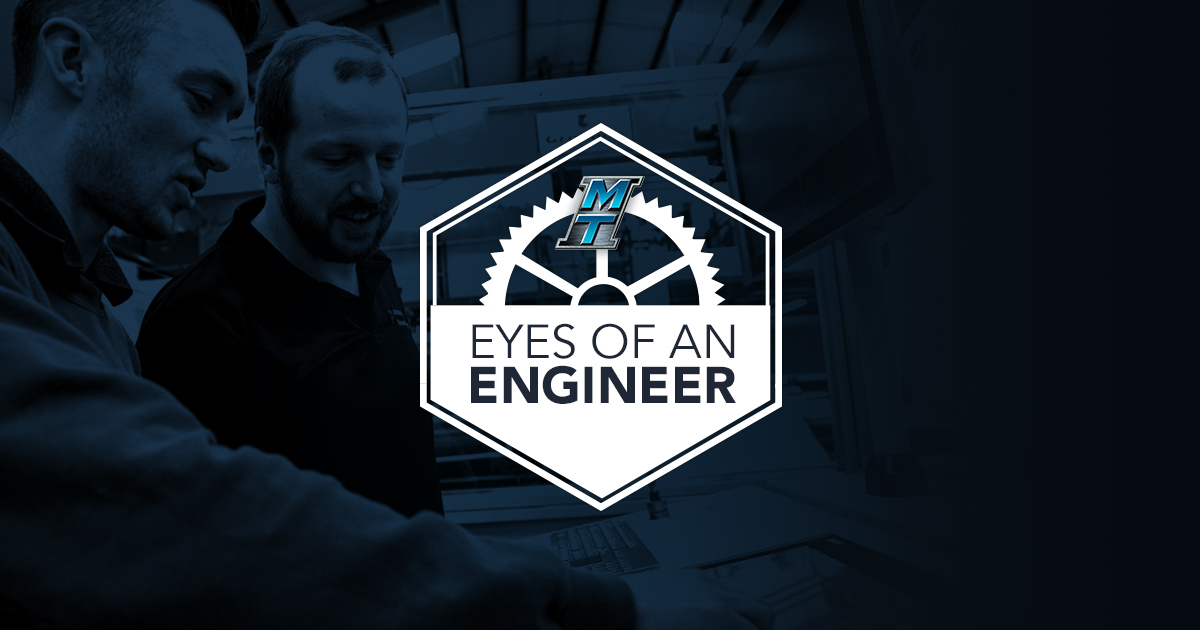 Jamie Clews (right) looks over the controls on a machine.

In part five of MTI's Eyes of an Engineer series, we sit down with Global Controls Technical Lead Jamie Clews.  Read on to see how an MTI college program transformed into a full-time job and a move to a new country for Jamie.

BORN TO BE AN ENGINEER

When Jamie Clews first stepped foot on the campus of Loughborough University in the UK, his mind was already made up: he wanted to be an engineer.

“I’ve been around friction welding since I was about this tall,” Jamie said, lifting his hand three feet from the ground.

Jamie was introduced to the unique solid-state joining process years before he even had to start thinking about college. His father, Tony, works at MTI in the UK and often shared his expertise with Jamie.

As Jamie grew older and entered his final years of schooling, MTI offered Jamie the chance to complete his one-year industrial placement at its Kingswinford location.

“I’ve always wanted to work with machines, so it seemed like a logical choice,” Jamie said.

After receiving his Master’s in Electronic and Electrical Engineering in 2013, Jamie chose to stay with MTI, signing on full-time as a Controls Engineer, a role that would quickly evolve into something much bigger.

Jamie moved up to Lead Controls Engineer after just a few years with the company. Not long after that, he took another step up, taking over as the European Controls Manager.

“It’s a case of making sure everyone is doing OK on the floor, providing support to the controls engineers who work on the machines, to the service department, to making sure everything is running as it should be,” Jamie said.

Jamie’s next step with MTI was a rather wide one: about 4,000 miles from his home in Dudley.

MTI needed a skilled engineer to oversee the globalization efforts of its controls engineering departments in the U.K. and the U.S.  MTI took note of Jamie’s expertise and approached him with the idea of moving to South Bend to head up Global Controls.

“It was exciting,” Jamie said. “It was a new country…I thought it was going to be fun.”

Jamie never knows what type of problems he will have to solve when he walks into work each morning. But he says that unpredictability is what keeps his job interesting.

“My days vary a lot,” Jamie said. “Things just fly at you and you have to keep standing and deal with one problem at a time.”

Even though Jamie’s job title has changed a few times at MTI, there’s one thing that has remained a constant: his love for watching an idea come to life.

“When a machine comes to a Controls Engineer, it’s a block of metal and some wires,” Jamie said. “But when we finish with it, it’s a fully working, moving, singing, dancing machine.”

Over the past nine years, Jamie’s hands have been on a lot of machines at MTI. Though if you ask him, one project sticks out as the highlight of his career: creating the controls for the Double-Ended Axle Machine.

“I saw that one from the day we took the order and then I was present for the final run-off in Germany,” Jamie said. “That was quite a complex machine. It took a lot of man-hours to get it up and running. To see that machine through, knowing I did that… I felt very proud.”

Though Jamie hasn’t sat in a classroom since university, he says thanks to MTI, his engineering mind has never stopped growing.  He says his job has helped him apply the principles he learned in school to the real world.

“[MTI] has taught me to become a more effective problem solver and to take a logical approach to working with things,” Jamie said.

Developing a machine as technologically advanced as a friction welder isn’t a one-man job. Jamie helped develop a team of talented engineers, the same people who he says have motivated him to stick with MTI for so long.

“It’s a very friendly environment here,” Jamie said. “People are very outgoing. They like to talk to you. You feel like everyone has an investment in making sure we are doing the best we can.”

A WORD TO THE WISE

If you’re thinking of pursuing an engineering degree, Jamie has some advice.

“Get some practical experience. It helps make everything click,” Jamie said. “Don’t worry if you don’t remember all the theory off the top of your head. The core skill of an engineer is knowing how to get the information you need.  Exams aren’t everything.”

If Jamie’s story excites you and you’d like to know more about who we are and what we do, then we say “welcome!”

MTI is dedicated to continual improvement – both of our technology and our team.  We begin this work with the help of our apprentices and interns who join us for 3-6 months throughout the year, directly engaging with our technology and experts so that they leave their time with us having made a true impact.

Our apprentice and intern programs are customized to your interests and skill set so that you gain the very maximum exposure to our work possible and are able to help us move forward in a way that’s exciting for you.

If you would like to learn more about our opportunities in design, electrical or controls engineering, industrial engineering, custom machine assembly, manufacturing leadership, marketing, human resources or maintenance then please click here to learn more and submit your information so that one of our team members can reach out to you.